When I chose Uncomfortable as my word of the year, I had NO IDEA! We are almost at the end of 2020. Time for reflection on the past year, before planning for the upcoming year. I can almost guarantee that 2020 didn’t go as planned, for anyone. Even for someone who chose to live uncomfortably this year. I’ve already written about having waited to get back to normal and adjusting to the new normal. Pretty much, we don’t want to hear it anymore. So how do we go forward into 2021 with a plan of action when 2020 was a dumpster fire for so many? First, let’s highlight the good. You survived a global pandemic. You’re here reading this today. I am going to share my reflection on 2020 here with you, today.

For 2020, my word of the year was Uncomfortable. I chose the word thinking I would put myself in uncomfortable situations in order to grow, personally, physically,  and professionally. Sometimes we can straight highlight the good. Otherwise, we need to reframe a little. I mostly am reframing here. Finding the wins, even if it wasn’t the exact goal. That’s the great thing about goals. They are what we are shooting for, not what we must reach. I use goals to set my compass for my action steps, and a win is always a win.

We were supposed to go on a cruise this summer, so financially and timing wise, I chose to not register for any Ragnar races. Part of that timing was also due to the fact that I was going to be dancing, a lot, over the summer and fall, which makes not only training for a race but choosing a race weekend difficult. Physically, my goals around exercises were going to be about my dance, not so much running.

I thought getting uncomfortable with dance was going to be taking more technique classes, even if they were just on YouTube. And getting more confident in performing again. We were actually just a couple weeks away from our first performance when everything shut down. In our show, I was in 5 pieces last time and was learning a few new pieces. The more pieces, not only the more choreography to remember and quick changes, but the better endurance needed. I haven’t had a group rehearsal for that show since mid-March. We never once performed the show in its entirety.  Instead, I have taken live classes with a dance company in New York and have my second virtual concert this weekend. My dancing has been me, by myself.

Towards that endurance end, I set a goal to PR my half marathon. My first half was last June, so a PR wasn’t a far stretch. I had picked a race in June, and another in August. I was going to see where I was with dance performances before I signed up. I actually ran a test half on March 7th, just to see where I was in my training. I had been doing heart rate training all winter, and wanted to see what I needed to do as far as speed over the next few months. I really lost motivation in training for a PR half, and let that goal slide. I did run a virtual half in June, but I don’t even know what my time was. I ran totally by myself, and didn’t even tell others it was my race day, so I didn’t have that same adrenaline to do better.

After saying I was skipping Ragnar, I participated in 4 virtual Ragnar races with friends between April and August. Currently, I am about to complete the 120 mile Virtual Aloha Challenge, our time frame was October 26 to December 20th. My run for today isn’t done yet, but I only need 1.5 miles to hit my 120. Since I joined that challenge, I am also logging miles with some friends to hit 100 miles between Thanksgiving and Christmas, I have 19.5 miles to go. The two challenges overlap a bit, so I am double counting my miles. Essentially, I will be keeping my mileage up from the end of October thru most of December. Talk about uncomfortable. I have never kept mileage up for that long before.

I joined a referral networking group, and I thought uncomfortable was going to be talking to other business owners before and after our meetings. Instead, uncomfortable was being the first person in the group to present via Zoom. I’m not making connections and conversations before and after our group meetings, I have been meeting one on one. Sometimes meeting over zoom, other times going for talking power walks. As we get to know each other, I have gotten to see how other businesses are shifting to meet the current times.

I thought uncomfortable was going to be reaching out of my normal sphere of contacts to grow Becka’s Boot camp to include new boot campers. Instead, uncomfortable was shutting down in person classes, switching to live zoom classes, re-opening and changing how classes run. I went from 9 hours a week of dance rehearsal and 4 days of running, to 12 boot camp and 3 yoga classes a week, sometimes my only running coming the weekend of a virtual Ragnar.

Once I re-opened in person classes, I was able to cut back on the boot camps I was doing on Zoom, allowing me time to increase my running again. Then I started rehearsing for a virtual dance show. Choreographing a solo on myself felt uncomfortable, I haven’t performed my own choreography since I was a teenager. I hadn’t even choreographed since college. In person class size has been cut to 2 people, and some people are unable to come to class.

Becka’s Boot Camp is no longer just Becka, or even boot camp. Lamaiya offers yoga and zumba classes virtually. Solvei is offering virtual fitness classes, some strength and others cardio mixed with strength. Uncomfortable to add new instructors to the mix only because change always has a level of uncomfortable. I cannot be more happy that the two of them wanted to join forces to help more people reach their fitness goals. 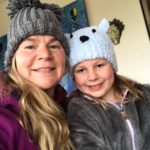 Having the kids home for e learning and distance learning, as well as home because so many activities have been cancelled has been in a way uncomfortable. The routine that I established 3 years ago with kids away at school all day changed. The kids gone to activities in the evening while I have class, largely gone. I have had to find different ways to keep the kids active. I have given up my desk, that I rarely used anyhow, for Jack. Coupled with that, Jack needed my desk because I gave his desk to Tyler.

My 20 year old son moved home, which makes my momma heart happy, but is just another disruption to my routine. When I thought about my uncomfortable personal growth, I thought more along the lines of meditation and journaling practices. Yet here I am, in a new routine of making hot lunches daily and running when I’m least likely to be asked how to spell a word or if 20-8 is really 12.

So where do I go in 2021? How do I continue to grow and push myself when I have no idea what life will look like in the coming months? This year has proved that it is just impossible to tell. While this year has been nothing I ever could have imagined, I wouldn’t say it was a total loss. I have so many things I have accomplished. Truly, I am excited to see where I go in 2021. I think this year’s biggest lesson was that, as long as your actions are pointed in the direction of your goals, you will come out on top. My direction for 2021 is up in the air, I have NO IDEA what I am going to pick as my word for 2021. Do you pick a word of the year? I’d love to hear in the comments what your word is for 2021!